In memory of my father Lorne B Kipp (1901-1945).
He did not fight in the war but served at home.
This article was published in The Ottawa Genealogist, Vol. 48, No.1. P. 24. January-March 2015.
Soldiers of the Soil
by Edward Kipp
By 1917, farm labour shortages led Canadian authorities to ask older children and adolescents to help.  The Soldiers of the Soil initiative was run by the Canadian Food Board and it encouraged adolescent boys to volunteer for farm service.  In exchange for their farm labour, for at least three months or more, they received a Soldiers of the Soil badge acknowledging their service.
I have had one of these badges in my possession for a number of years and wondered what it was for and who it was given too.  The badge came from my Grandmother Kipp's estate. 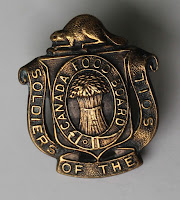