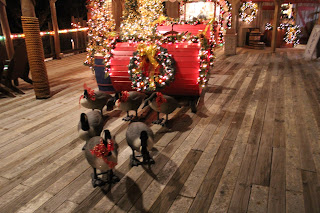 The last three days were mostly driving on the bus with stops at Drury Inns in Terre Haute, Indiana and Troy, Michigan. At the Michigan Hotel we ran into a whole bunch of people who were staying at the hotel and were planing their Black Friday attacks on the consumer world. They were just a bit weird! We had dinner at noon at a Cracker Barrel. We had the turkey dinner special and we therefore had our second thanksgiving day! Turkey, ham dressing, gravy, cranberry sauce, green beans, sweet potato casserole, and biscuits.

Home Friday night in Ottawa about 8 pm. There was a lot of driving on this trip but the shows were worth it and we will probably do this again.

This was supposed to be country music tour and there was country music played, however, being so close to Christmas the emphasis was on Christmas Music.
Posted by Edward at 8:39 AM