My Foote connect is rather distant, going back to my 7th Great-Grandmother Elizabeth Foote (1654-1696), who married Daniel Belding (Belden) (1646-1731). This family had exceptional things happen in their lives. Daniel and Elizabeth were caught up in the Indian raid of Sept. 16, 1696 on Deerfield, Mass. Daniel was taken prisoner but Elizabeth was killed. Daniel and other members of the family who were not killed had a long trek ahead to Canada. One of their daughters Sarah (1682- ) managed to survive the attack by hiding under a pile of tobacco. Sarah and her husband Benjamin Burt were later involved in the French Indian raid on Deerfield, Mass., Feb. 29, 1704.


I decided to attend the reunion and meet some of the members of the Foote family. The reunion was held in South Burlington, Vermont.


First however, I should comment on our trip from Orleans to South Burlington. We took our usual route through Cornwall, Ontario and then across upper New York State, through Fort Covington, Westville, Constable, and Chateauguay to Ellensburg. At Ellensburg we stopped for lunch at the local deli (where route 190 leaves Highway 11) and were very pleasantly surprised. The food was great and it was prepared fresh as it was ordered. From there we followed Highway 11 to Champlain and then to Rouses Point where we crossed the bridge into Vermont at the top end of Lake Champlain where it meets the Richelieu River. We then travelled south through the Champlain Islands. The drive through the islands is very nice for views of Lake Champlain but it is a very slow drive. We decided this time to stop at Isle La Motte to visit Saint Anne’s Shrine. There were not many people around at this time of year so it was very quiet. We visited the gift shop and looked around. There is also a statue of Champlain and guide located there. This is also the site of Fort Ste. Anne, Vermont’s oldest settlement. After this stop we were on our way to our hotel in South Burlington. 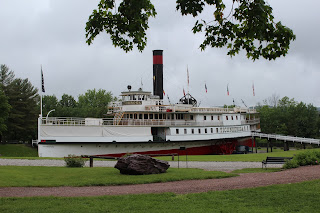 The first order of business after arriving at our hotel and getting settled was to go to the family meeting room to check in and meet some of the Foote relatives. They were very friendly, and interested that we were from Canada. At the Friday night get together, we were introduced to the group and I had an opportunity to point out that I had Loyalist ancestors as well as ancestors on the other side. They also held part of their annual meeting on Friday evening.


Friday, the organizers arranged a group bus tour to the Shelburne Museum at Shelburne, about 20 minutes south of the hotel. In spite of the rainy weekend and the fact that the museum involved outside walking we had a great time. The museum is a collection of different collections that had been collected by Electra Havemeyer Wyeth (See Wikipedia). They were all very fascinating, and if one had a particular interest, this would be a great place to study in detail. The doll and carriage collections were extensive. The Circus Building with its miniature circus was outstanding. Also on site is the steamboat Ticonderoga which was hauled there from Lake Champlain by rail. They have a video showing how it was done.


On Saturday we attended two genealogy lectures given by members of the family. They were both very good. The afternoon was free so we got in the car and went to visit Shelburne Vineyard, Vermont Teddy Bear Factory and Lake Champlain Chocolates. At the Teddy Bear Factory we bought two bears and had a tour of the manufacturing area. The Lake Champlain Chocolates were excellent and we did bring some back with us. We even managed to fit in a bit of shopping at the University Mall, near the hotel.


In the evening, we all trouped off to the Burlington Harbor for a dinner cruise on the Spirit of Ethan Allen III on Lake Champlain. Everyone seemed to have a good time. We said our goodbyes, as we were off on our travels the next day.


I had decided to travel to my home town of Princeton, Ontario to plant flowers at the gravestones of my mother and grandparents. After leaving Burlington we headed back towards the Champlain Islands and took the ferry to Plattsburgh, New York and then headed across rural New York to the border crossing at Ogdensburg. We then headed west on the 401. While the day in Princeton was a bit wet we did manage to purchase geraniums at a local nursery and then plant them. We also found time to visit the new library facilities for the Oxford Branch and the Brant Branch of the Ontario Genealogical Society. These visit indicated that it was time to return to do some more research at each one.


On our arrival home the next day, our trip ended successfully!
Posted by Edward at 8:41 PM