The day turned out to be a great day for this celebration. The weather cooperated with no rain. It was sunny mostly with a little breeze coming off the Ottawa River and funneling up the Rideau Canal entrance locks in Ottawa. 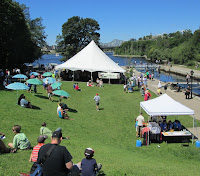 Elizabeth and I along with Kyla and Mike looked after the Ottawa Branch Ontario Genealogical Society table for the day. We talked to a number of people during the day. There were a lot of people passing by but the traffic in the Exhibition tent seemed to be lighter than usual.

Three of us, Elizabeth, Edward and Kyla dressed up in costumes representing different time periods. I know that I did attract a little attention, as a number of people asked to take my photograph. Kyla had a demonstration of book binding and even made it on the CTV news that evening for about 5 to 10 seconds. 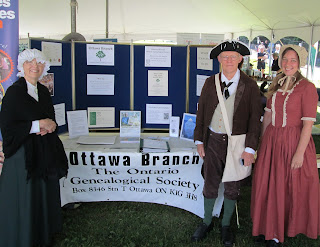 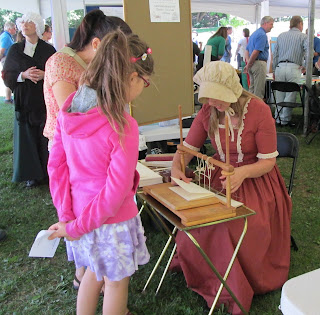 The one group that did attract attention was the 78th Fraser Highlanders Fort Glen Garrison. This is a re-enactment group staffed by students. They had a great drum and fife band and presented mini concerts throughout the day. There were many people dressed in costume wandering around during the day. There was the annual celebration at the Irish Workers Memorial cross beside the canal.

To find out more about Colonel John By do a goggle search and look at the Wikipedia article.

Also have a look at Council of Heritage Organizations of Ottawa (CHOO)website under events. www.choocopo.ca/english/.