This reunion is held every two years and because of my illness in 2011, I was unable to attend the reunion in Washington, DC in 2011. Previous to that we had attended reunions in Utica, New York, Warwick, Rhode Island and Fort Wayne, Indiana.

I wanted to attend this reunion in Newport, Rhode Island, because it gave me another opportunity to visit Block Island, where the Rathbun family settled about 1658. The original settler was John Rathbun (1639-1702), who married Margaret Acres (1633-aft 1716). I am descended from his son John Rathbun (1655-bef 1723), who married Anna Dodge. My Rathbun descent then goes down through 6 generation to my great grandmother Mercy Ann Rathbun (1856-1930), who married William Henry Link (1850-1899).

It is a long drive to Rhode Island so we headed off on the Sunday heading for a hotel at Windsor Locks, CT just above Hartford. We have stayed here several times and it is a reasonable and nice hotel. There is also a Cracker Barrel next door and an Italian Restaurant across the road, so food is nearby.

The next day we needed to be in Newport Rhode Island by late afternoon. Along the way we did some cemetery shunpiking, which I will talk about in another blog post. This involved cemeteries in the Old Lyme area at the mouth of the Connecticut River. We also spent some time locating a monument to Nathaniel Foote in Wethersfield, CT. Nathaniel was a founder of Wethersfield. The funny part is that we had no specific directions to find it and everyone we asked didn’t know. However, a caretaker in the Old Cemetery, talked to us and looked at the picture we had and suggested it might be located on the Green. He points in the direction of the Green and we found the monument there.

We also visited Windsor, CT to see the village green and locate the Windsor Historical Society which I will have to visit some day. Two of my ancestors were founding families of Windsor. They were Thomas Dibble and Joseph Loomis. There are two large monuments on the village green. The first monument is to Major John Mason a founder of Windsor. The second monument is for the passengers of the Mary and John who migrated to Windsor about 1635. It is said that Thomas Dibble and Joseph Loomis were on the ship, but it would seem there are differing views on this.

We arrived at Newport around 4 p.m., after crossing the Jamestown Bridge to Jamestown and then the Claiborne Pell Bridge to Newport. After settling into our room we dropped by the Family Hospitality room to check in, get our name tags and say hello. In the evening there was a welcome buffet in the dining room of the hotel. Lots of food and this is when we started meeting my relatives.

After dinner, the group held their formal reunion meeting which included presenting awards and recognition certificates to family who have contributed to the association. Previously, I had been asked to join the family association board. I agreed to this after some thought and the nomination was accepted at the meeting. They wanted to make it an international association. 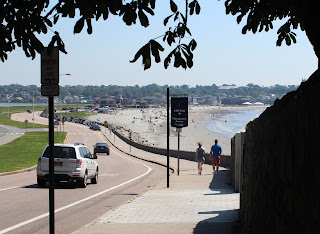 Tuesday had been set aside for a trolley tour of Newport, but we decided to tour around on our own. I had visited Newport 20 or so years ago on business and did not really see much of the city except for one of the mansions where we had a formal dinner. So with the help of our GPS and local maps we took off for the first beach area where we found a parking spot. We then walked part of the Cliff walk, which passes behind many of the mansions. We went all the way to one of the more famous mansion, The Breakers. We then headed back to our car and went for a walk on the first beach. It was very sandy, and we waded along the beach. There was lots of reddish seaweed being washed ashore. We found out later that there were little crawly creatures being washed in as well. Nice walk with lots of sun. We then got back in the car and drove along the coast to see the second and third beaches. There is lots of sand in this area and I can see why many people take their vacation there.

Having had lots of sun we decided to go back downtown and visit the harbour area for lunch. On our way we drove around the Ocean Drive and then past more of the mansions. After finding parking, we wandered around for a while looking for a restaurant and finally decided on the Aquidneck Lobster Company. The entrance was a bit dumpy but the restaurant area was on the end of the pier, so we had a good look at the boats and the harbour. We both had Lobster salad rolls for lunch with a salad and French fries. This was a tasty and filling meal. We then went for ice cream shakes at Ben and Jerrys.

By the time we were done with lunch (Dinner), it was time to head back to the hotel for my first board meeting a s a new member. The meeting went well.

In the evening we visited the Hospitality room where we displayed my ancestral fan chart for all of my fathers and mothers families and chatted with family members.

Wednesday was the big day with the activities mapped out for a fast ferry ride from Newport harbour to Block Island. The ferry had a top speed of about 25 knots, so the trip took about an hour. We arrived around 10 a.m. and then boarded a bus which took us Settler’s Rock located on Sandy Point. The plaque lists the first settlers of Block Island. After that we had a brief tour of other areas of the island and then made a stop at Island Cemetery. This is where the Rathbun family association had erected a monument to the family. Everyone had a good look around and a wreath was left at the site. We also found the monument erected for Tristrum Dodge the father of Anna Dodge.

I think everyone was a bit tired after the trip and the sun and we then headed back to the Old Harbour where we had lunch on the porch of the National Hotel. A welcome meal, with a daiquiri, helped quench the thirst. We had a long chat with members of the family.

We then had several hours to look around while waiting for the return ferry to Newport. So we looked around the shops, had some gellato ice cream, walked a bit and spent an hour or so at the Block Island Historical Society, some of it sitting on the porch in the shade. Keep in mind this trip took place during the week long heat wave that covered most of New England and the north east of the US and into Ontario. Everyone was ready for the ferry back to Newport. The ride was pleasant and the passenger cabins were air conditioned.

Thursday was a free day for the reunion so we decided to leave in the morning and head toward Ridgefield, CT to do some more Cemetery shunpiking. After that we headed back to Windsor Locks to our hotel. We had arranged to meet am acquaintance for supper. She does proofreading for the Journal I edit for the Ottawa Branch OGS and lives in Connecticut. We had a pleasant meal at the Italian restaurant across from the hotel and then returned to the hotel lobby to chat for a bit longer. A very pleasant evening.

Friday was a day to do some family research. We spent the morning at the Connecticut Society of Genealogists in East Hartford. We looked at their ancestor files, some vertical files and a few books. The real treasure trove, was the Connecticut Historical Society which we visited in the afternoon. Their collection of family books was very good. We would need several days to look at them. The interesting part was their collection of vertical files. To see them you had to provide the family name and someone would then go into their stacks and pick out the packages associated with the surnames. These were very thick packages. We took a number of photos of pages to review later. 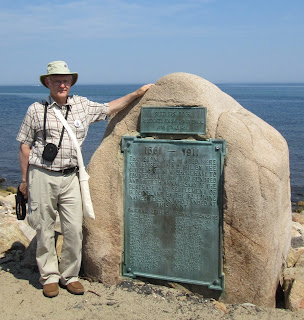 We had decided that Saturday would be a fun day. We were still at Windsor Locks. We headed south again towards Long Island Sound to a place called Essex, CT. Here you will find the Essex Steam Train and Riverboat. We arrived in time to obtain tickets for the 11 a.m. departure. We bought tickets for the open car as it was so hot. Also taking place that day was the Circus train and Big Top show.

After we boarded, the train crew went through their departure routine and we headed off with bells and whistle blasting. It was nice to hear the steam whistle again. We did have a steam train ride in Lancaster, PA in May. We went about 12 miles along the tracks and then backed up to an area where we took the Becky Thatcher for a ride on the Connecticut River. It is a simulated Mississippi style riverboat. We probably traveled about another 12 miles upriver and turned around at the East Hadam swing bridge. Along the way we had glimpses of Gillette Castle, and a wild life area. This ride was interesting as many of my early ancestors would have traveled this river by boat.

We spent some time in the gift shop and then stayed to watch the next train leave. We learned along the way that the steam engine they use for the trips was constructed in China! Oh well!

That completed our week away from home. So we headed back to our hotel to pack and head off for home on Sunday. The ride home went without incident, although there was a lot of traffic. We arrived home safely about 5 p.m.
Posted by Edward at 9:47 AM