Coach Tour to the Agawa Canyon and Mackinac Island 2014

I meant to write about this right after the trip, but we were too busy!
September 29 to October 2, 2014.

The Agawa Canyon Tour
This tour involved taking a coach ride to Sault St. Marie in Ontario. From there you board the Algoma Central Railway at the "The Soo."  The trip to the canyon takes about 4 hours, and on the way you see lots of trees, lakes and rock. At the canyon on a sunny day one can see the spectacular colour display of the trees as they prepare for their winter sleep. There are walking trails which take you to three locations, Bridal Veil Falls, North and South Black Beaver Falls and of course a lookout. The lookout requires one to navigate 300 steps up the hill and from the top there is an excellent view of the train and the canyon. 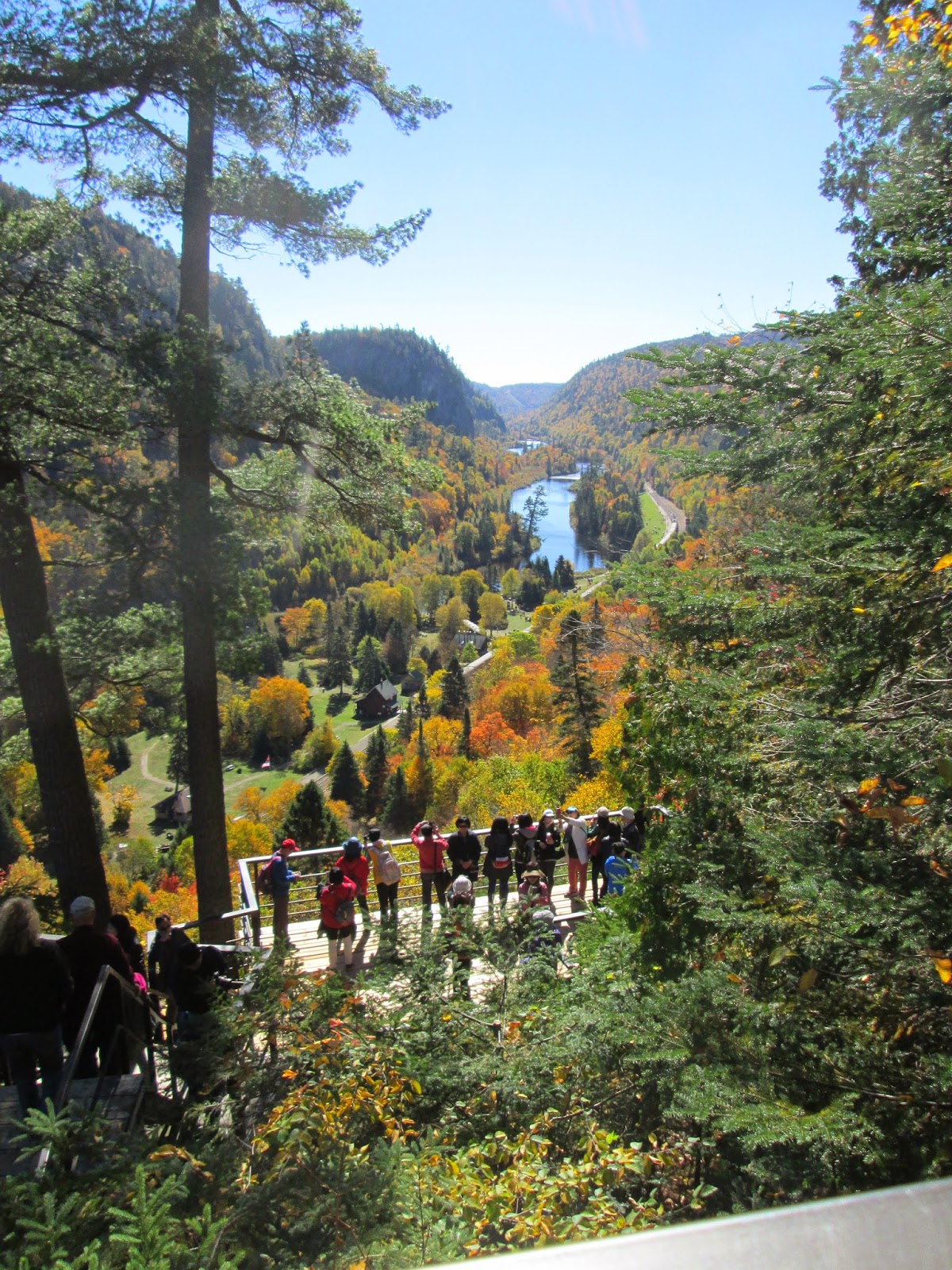 When we were there most who were mobile ascended these stairs. There are several stopping points where one can catch a breath. The view was worth the climb. The people on the train the day we were there were the only ones who had a sunny view of the canyon that week.

One can also buy breakfast and lunch on the train. For lunch, we opted for the box lunch so we would have more time to walk and climb. Even so, we just had enough time to look at the sights before the train returned to "The Soo."

Mackinac Island
Mackinac Island is located about a hour south of Sault St. Marie, Ontario, in the United States. The island in Lake Michigan is about 9.8 square km and is a popular tourist attraction.

Mackinac Island has a history relating to European exploration in the 17th century and later the fur trade. Fort Mackinac was built by the British but it was ceded to the the U.S. by the Treaty of Paris in 1783. The British captured the Fort in the first battle of the War of 1812-14. John Jacob Aster's American Fur Company was centred on Mackinac Island after the War of 1812-14.

One interesting aspect of the island is that there are very few motorized vehicles on the island. Most transportation is done by horse drawn carriages, bicycles or walking. There are two major historic sites on the island, The Grand Hotel and Fort Mackinac.

We had a horse drawn carriage tour of a part of the island, which included a stop at the Grand Hotel for lunch. We have never eaten in such a large lunch room before. The room was perhaps 300 feet long by 60 feet wide (estimated). It was filled to the walls with tourists eating and enjoying the atmosphere of a grand hotel. Except for drinks, the food was available in buffet style. This was a experience.  While we were on our bus traveling, our guide showed us a 1980 film titled "Somewhere In Time," starring Christopher Reeve, Jane Seymour and Christopher Plummer. Interesting film about time travel, filmed on location at The Grand Hotel.

This was a four day trip which we enjoyed, except maybe for the last day on our return trip home. At breakfast we discovered that there had been an accident during the night on the Trans-Canada Highway in the Elliot Lake area and the highway was closed. Our tour guide and driver decided to wait until the highway was officially open, which happened around 11:30 am. This meant that we arrived home in Ottawa About 11:30 at night.