Continuing with the political times in the 1600s in The Netherlands

I am into the political times of the day in The Netherlands in this time period in my thinking. It was a time of unrest as the Holy Roman Empire slowly dissolved and became the countries that we know today. France was dominating the area although the article that I found showed the Prince-Bishop of Munster (Christoph Bernhard von Galen) up against  Lieutenant General (Carl von) Rabenhaupt. Rabenhaupt who was recruited by the Dutch in 1671. Getting back to the 1600s though which is the real interest time period  and it comes at the end of a century or more of economic prosperity for the Low Countries as they are known (The Netherlands, Belgium and Luxembourg). The last years of the 1500s and the early years of the 1600s are marred by a series of conflicts with the Spanish Hapsburg rulers. In 1581, this area became an independent state known as the States General or the Dutch Republic. In 1609 the Twelve Years' Truce brought the Dutch Republic into its Golden Age which lasted from 1609 - 1713 and saw the Dutch Republic ranked as one of the most powerful and influential in the world. This was the time of emigration to the Americas and the Dutch were at the forefront establishing New Holland (large parts of present day New York State) and New Amsterdam (now New York City). It can be understood that many of the Dutch were interested in emigrating and Hendrick Hendricksen Kip with his wife and six children were amongst those who did.

Having found a likely location for the birthplace of Hendrick which lies in present day Germany albeit a little square block of land that sticks into the Dutch countryside; I have not yet found a map that shows anything different with regard to this small area of land. Since he did move to Amsterdam and was prosperous there as far as is known, one assumes he was likely Dutch. His yDNA places him in the Frisian ethnic group (i.e. living within 100 km of Amsterdam). What does within 100 km of Amsterdam look like?

Cities  within 98- 100 km of Amsterdam - Boxtel, Den Helder, Brielle, Druten, Waalwijk, Arnheim, Heudsen, Oud-Beijerland and interesting enough all of these cities are in The Netherlands. I sort of rest my case. What can I learn about the Frisians? They lived along the seacoast and were there before the Roman Empire expanded. As the North Sea rose towards the end of the first millenium the Frisians moved inland, although this area again became populated after diking and the people were called Frisians, there seems to be some doubt that this was a large return of the earlier population. 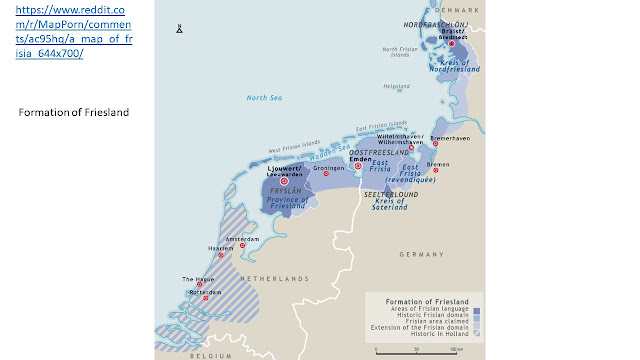 Interestingly you can clearly see on this map the square block of land on the eastern border of The Netherlands where this small village was located that the Betrothal Notice stated as being the birthplace of Hendrick Hendrixsz. These borders were pretty fluid in this time frame and it was more of a matter of who controlled the land. I still have no idea on that other than the pieces from a book and the London Gazette discussing a war in 1674 wherein the Dutch controlled that particular town.

Edward tested his DNA at 23 and Me, Ancestry, FT DNA, Living DNA and it was uploaded to My Heritage. He also tested at Ethnoancestry and Sorenson. At 23 and Me Edward is said to belong to Z-326 and share an ancient ancestor (10,000 years ago) with King Louis XVI.

87.9% French and German (this includes the area in the border area above where the town of Niewenhuys was located)